Culinary enjoyment in a historic place

Café Willem Albert is located on the ground floor of The Market Hotel and offers the possibility to dine extensively, but also to have a drink at the bar or on the spacious terrace. In the summer it is wonderful to relax on the terrace on the Grote Markt and you can enjoy the sun and the pleasant bustle of the city for hours.

But Scholten was not only involved in agriculture. The Nederlandsch-Amerikaansche Stoomvaart-Maatschappij (NAVM) founded in 1873 – which would later become the Holland-America Line – was struggling with a difficult launch. The biggest challenge was finding financiers. Here Willem Albert saw his chance and invested 600,000 guilders in the company. With the condition that a ship would be named after him.

The name Scholten can be found in the stained glass windows of the old waiting room in Hotel New York, on the ship that is named after him.

The house on the Grote Markt

Willem Albert Scholten had set his sights on building his own palace in the heart of Groningen. He bought three buildings on the Grote Markt, had them demolished and built his enormous house here in an eclectic style. In 1881 he and his family moved into the building he had built. However, the building also has a loaded and sad history. During the Second World War, the house was confiscated by the Germans and used as one of the headquarters of the Sicherheitsdienst and the Sicherheitspolizei. During the war many resistance fighters were imprisoned here, interrogated, tortured and later executed. During the liberation of Groningen, the building was heavily shelled, set on fire and eventually completely destroyed.

Now, many years later, The Market Hotel has been built on exactly this spot.

Because of the historical connection and the story of this special Groninger, it was decided to name the restaurant in The Market Hotel after Willem Albert Scholten. As a tribute and as a reminder of our shared history. A turbulent story that is kept alive by commemorating it so that history is not forgotten. 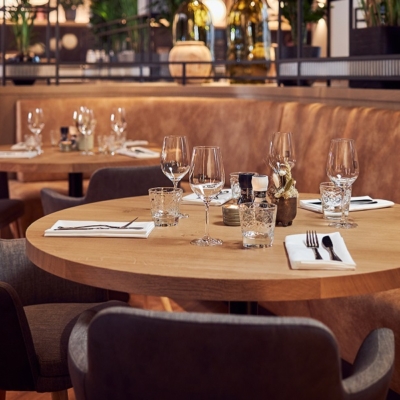